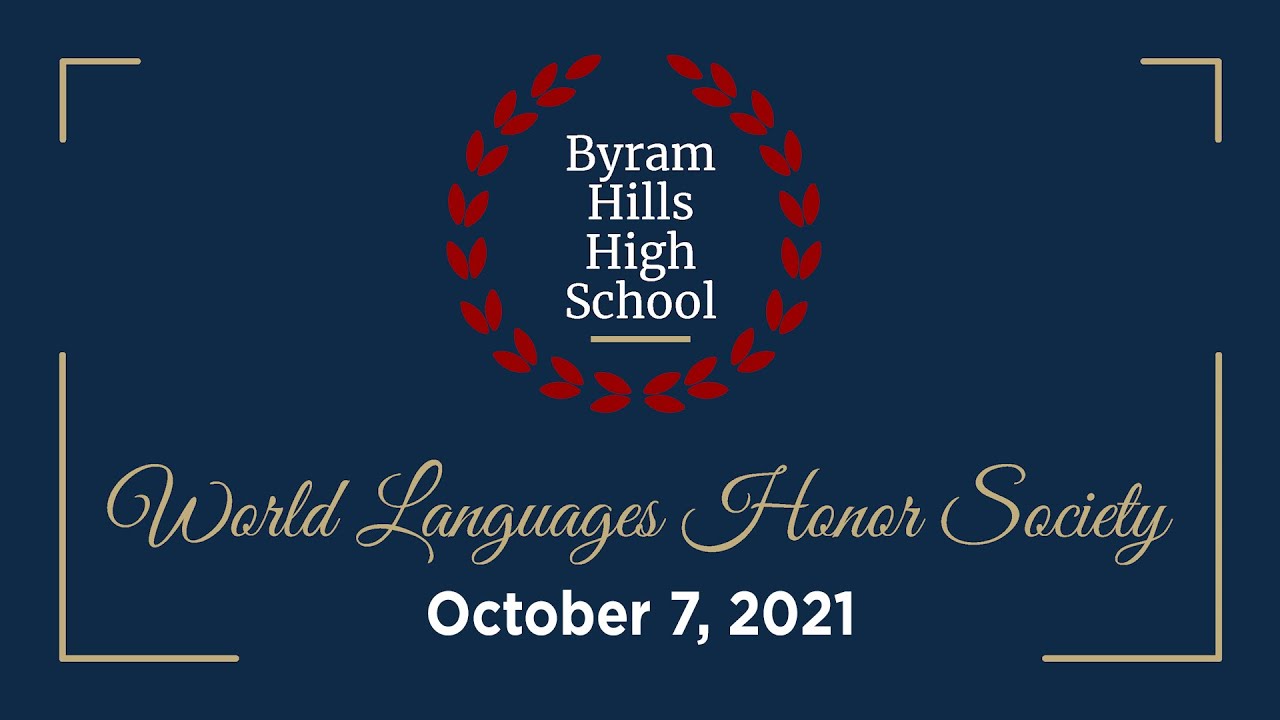 Eighty-seven Byram Hills High School seniors have been inducted into the World Language Honor Society, an achievement that reflects their hard work and dedication to the study of French, Italian or Spanish.

In a virtual ceremony Thursday night, World Languages Chairperson Melissa Stahl congratulated the students and encouraged them to continue their language studies. To become a member of the honor society, students must have an A or A+ final average for three consecutive years.

“As language teachers and learners, we are tasked with so much more than just putting together sentences to ask a question in the target language,” she said. “We are entrusted to show students how cultural perspectives create a backbone to a language, how people from different political, racial and religious backgrounds are joined by the commonality of a language, and how accepting and appreciating these concepts can broaden our horizons and understandings of the world.”

“The students being inducted this evening understand these ideals and we hope they continue as lifelong learners to pursue a meaningful relationship with other languages and cultures,” Ms. Stahl added.

Brandon Lutz, a 2010 Byram Hills graduate, delivered the keynote address, lauding the value of learning world languages. Mr. Lutz took AP Spanish at Byram Hills and became fluent in French, Dutch and German at The University of Texas at Austin.

He praised the inductees for this “absolutely amazing achievement.”

“Pursuing foreign language is immensely challenging and reaching this level shows not just grit, but highlights you all as ambassadors of a more globally minded world,” he said, adding: “As seniors, you’re on the cusp of an incredibly exciting time in your lives and I want to advocate that you continue to make foreign languages a part of yours in the future.”

He talked about what studying languages has taught him. He said that learning a world language is “the gift that keeps giving” because learning one Romance language may help you learn another; that studying another language opens up the world, especially during travel; and that the grit and bravery it takes to speak in another language shows you have courage.

“If there’s anything to take away from foreign language, it’s that it builds your
confidence like no other subject can,” Mr. Lutz added. “All of you here have proven that you have the courage needed to succeed in this subject, and I want you to remember this courage transcends the classroom.”

After the address, each inductee’s name was read aloud.

The students inducted for French are:

The students inducted are Italian are:

The students inducted for Spanish are: 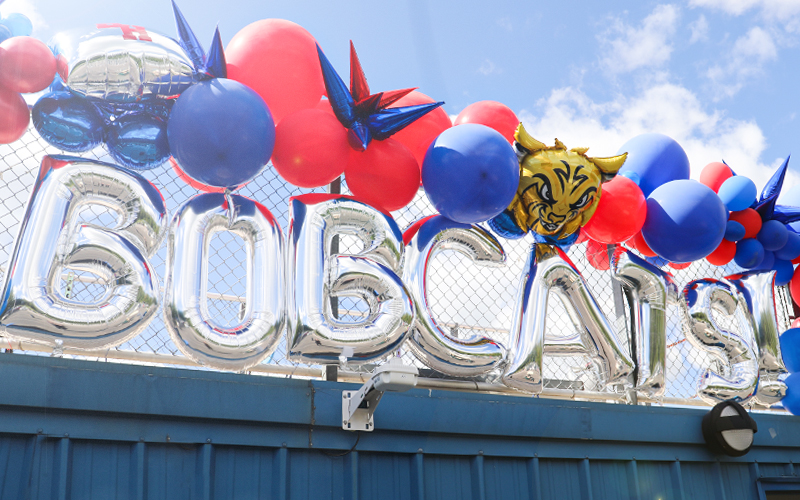 “We had a terrific week with an abundance of school pride and community support,” said Rob Castagna, the Byram Hills Director of Health, Physical Education and Athletics.

The high schoolers lined the entryways at H.C. Crittenden Middle School, Wampus Elementary School and Coman Hill Elementary School to greet the younger students as they arrived at school. The athletes and cheerleaders clapped, cheered and waved, with cries of “Go Byram” and “Let’s go Byram” ringing out.

It was also Spirit Week at Byram Hills High School, with students dressing up for fun theme days. There was pajama day, Hawaiian day, neon day, color day and Friday was Bobcat Pride Day. Students in the lower schools donned their blue and red on Friday as well.

The athletic program had a busy week, with varsity home games under the lights each night from Tuesday through Saturday and home games for the non-field sports as well. The community turned out with fervent support for the Bobcats. This year featured more games during homecoming, especially for the junior varsity teams.

The high school pep rally, a beloved annual tradition, took place on the turf field Friday afternoon. Students cheered each other on as they competed by grade level against faculty members in spirited games of balloon pop, pass the hula hoop and the toilet paper mummy wrap. The concert choir sang a beautiful rendition of “The Star-Spangled Banner” to open the event and the 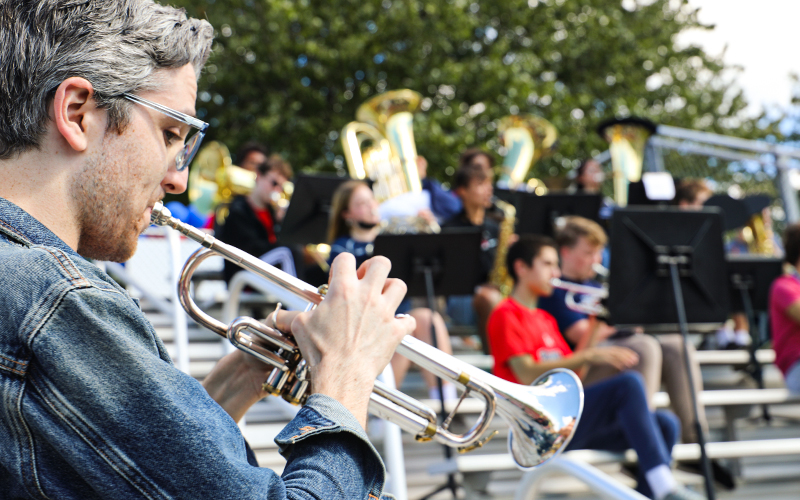 Byram Band added to the festivities with favorites like “Sweet Caroline.”

Hours after the pep rally came Friday Night Lights, as the varsity football team took to the 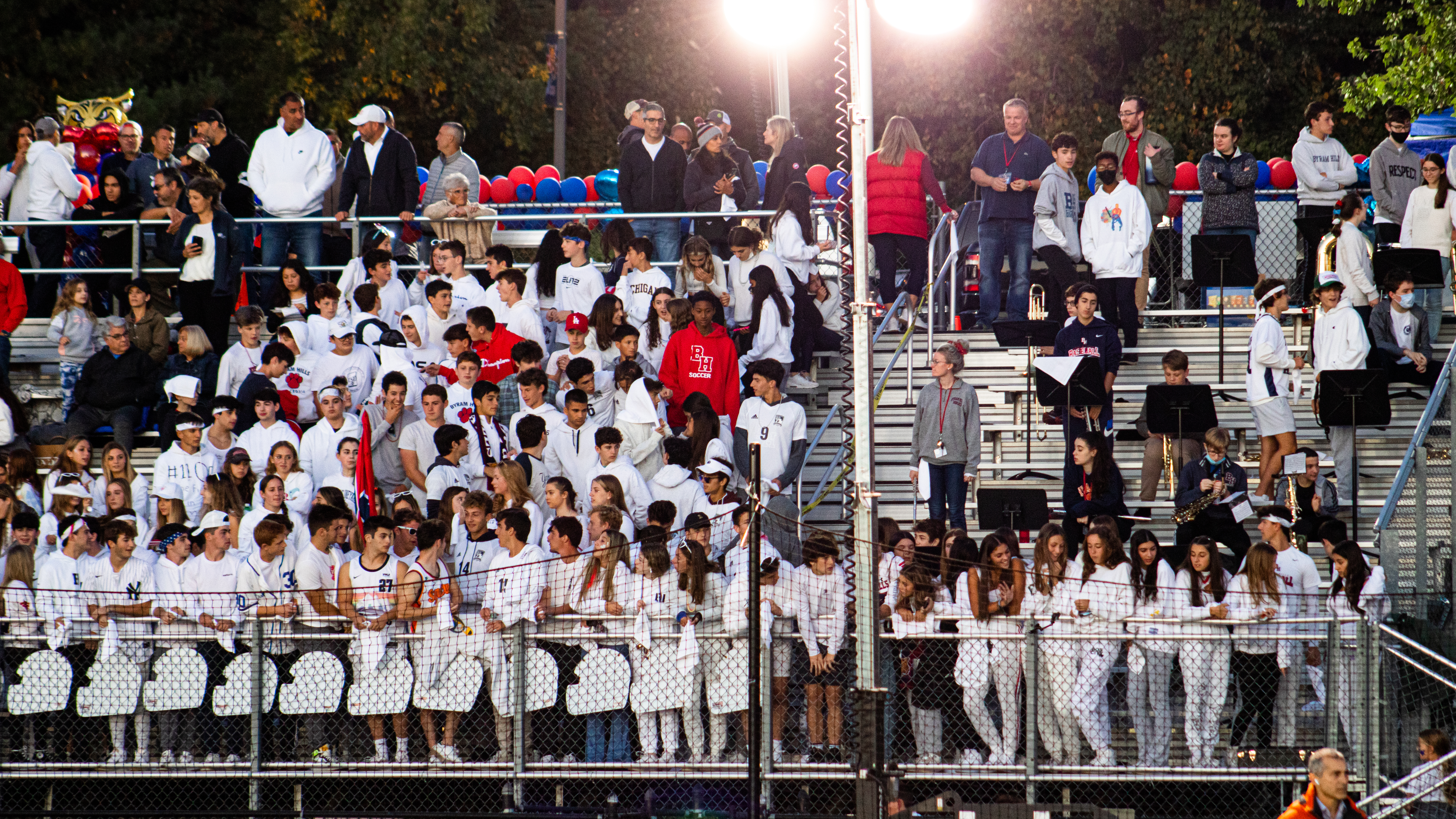 field in front of a cheering crowd, and the band played as well.

“To receive this award during homecoming is extra special for Alyssa, our tennis team and for our athletic program,” Mr. Castagna said. “It is a great honor and we are proud of her accomplishments.”

Homecoming Week concluded with the Byram Hills Education Foundation’s outdoor family movie night on Sunday on the high school’s turf field. More than 200 families attended along with dozens of high school athletes who played games with the younger students from all of the schools before the movie began. The showing of the sports comedy “The Sandlot” was a fitting end to the festivities.

“We were so happy to celebrate Homecoming Week at Byram Hills,” Byram Hills High School Principal Christopher Walsh said. “I know our students enjoyed coming together as a community to show their Bobcat spirit and pride.” 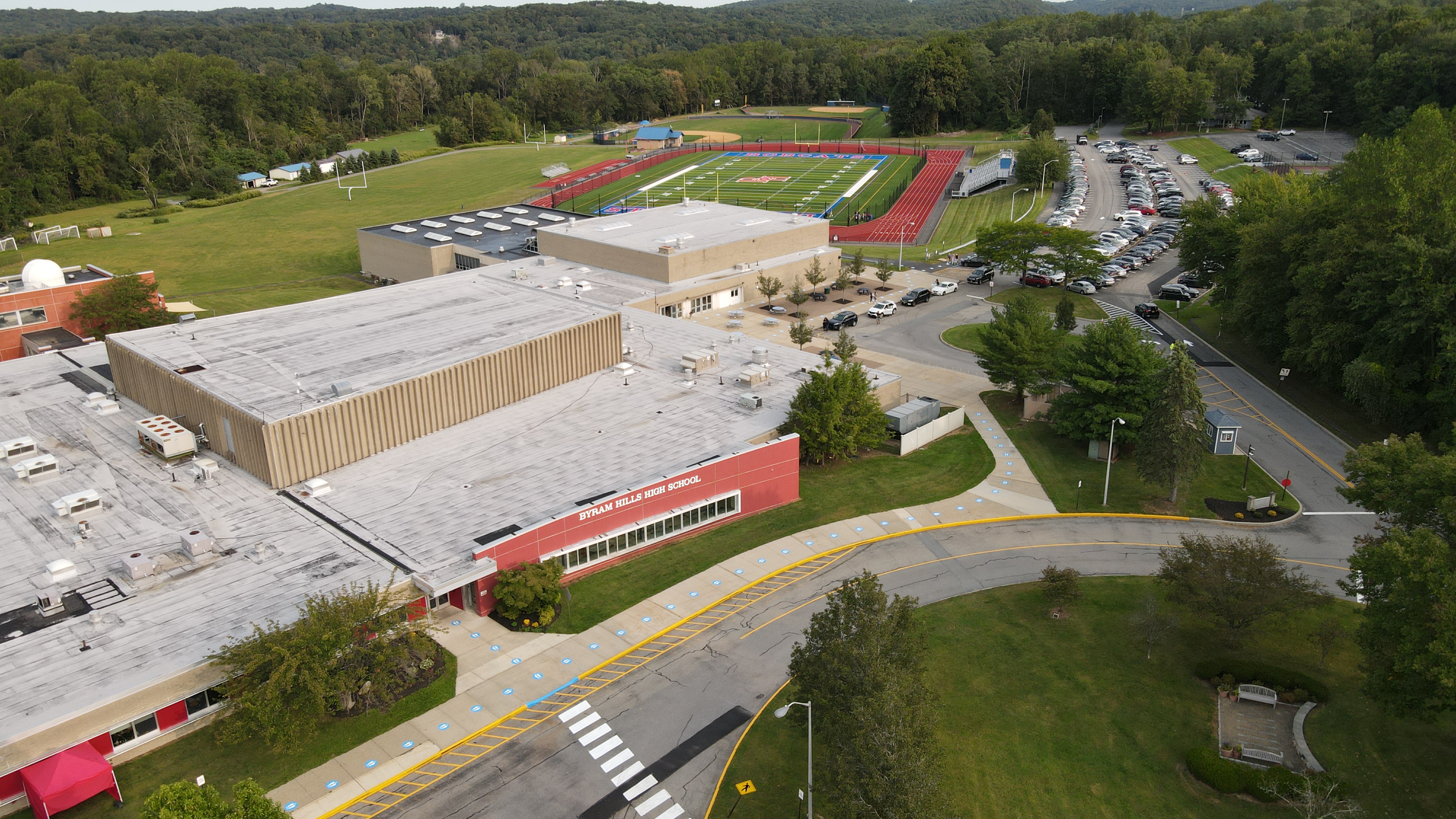 Byram Hills High School is pleased to announce that 21 students have been named Commended Students in the 2022 National Merit Scholarship Program.

“Congratulations to our National Merit Commended Students,” Byram Hills High School Principal Christopher Walsh said. “We are incredibly proud of them and all of their hard work and achievements that led to this recognition.” 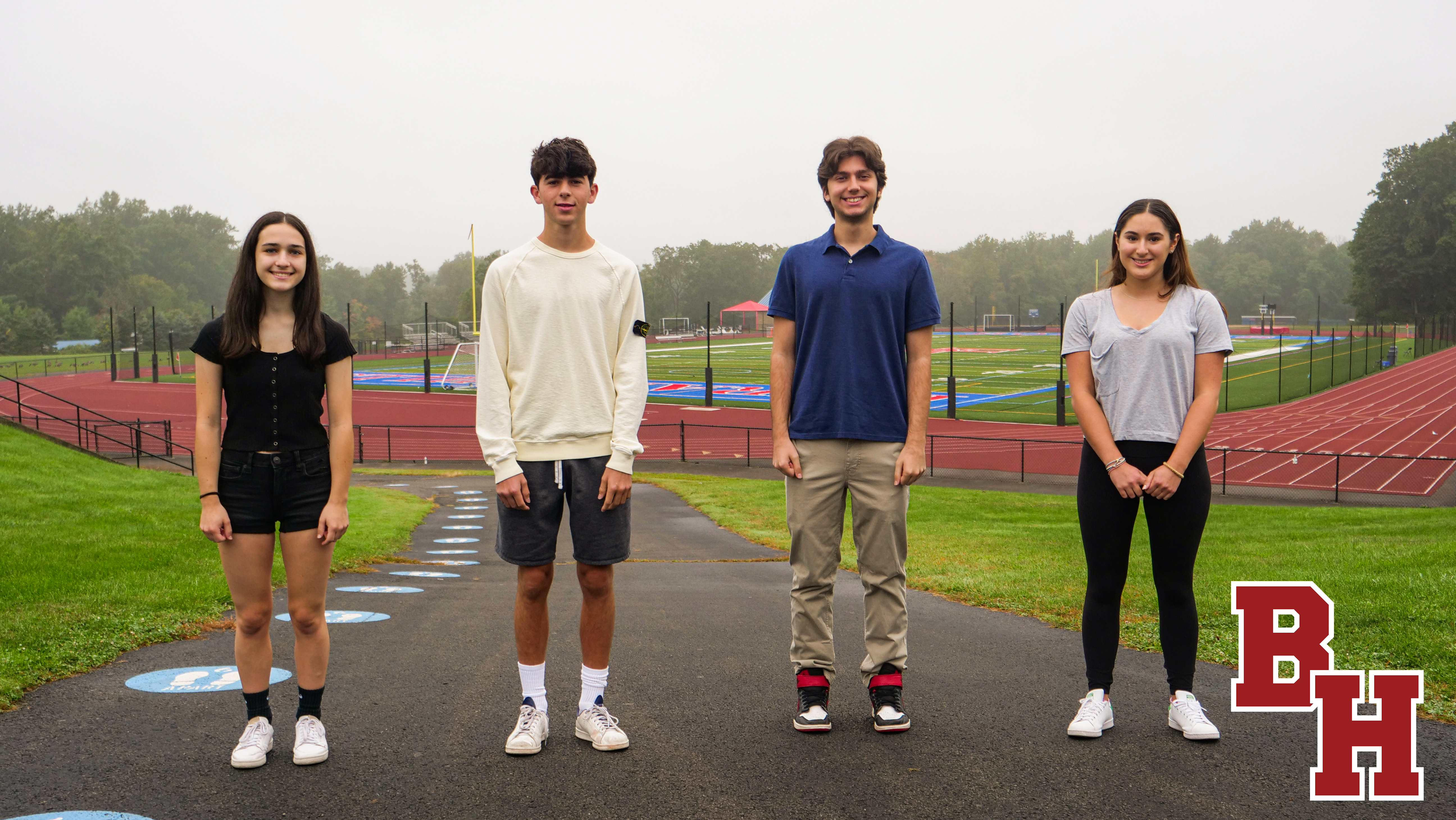 Four students at Byram Hills High School have been selected as semifinalists in the 2022 National Merit Scholarship Program.

Byram Hills seniors Olivia Addeo, Ryan Bernstein, John Ndocaj and Jane Zeltner can compete for 7,500 National Merit Scholarships worth nearly $30 million that will be awarded in the spring.

“Our distinguished students should be commended for their pursuit of academic success,” said Kristina Wilson, the Byram Hills Guidance Chairperson.

“It’s very impressive that you’ve been able to earn this achievement even though life threw a real curveball,” she said. “You still persevered and worked hard and achieved this amazing accolade.”

“Congratulations, this is a huge honor,” Ms. Wilson told the students.

“We’re always extremely proud of our students who are selected as National Merit Semifinalists,” he said. “We know they have worked extremely hard to receive this acknowledgment of their achievements and we congratulate them.”

The students entered the scholarship competition by taking the Preliminary SAT last year.

They are among approximately 16,000 semifinalists in the 67th annual National Merit Scholarship Program. The semifinalists from around the nation represent less than 1% of high school seniors in the United States, and include the highest-scoring entrants from each state.

Students must apply to become finalists. The application process includes writing an essay and maintaining an outstanding academic record in high school. 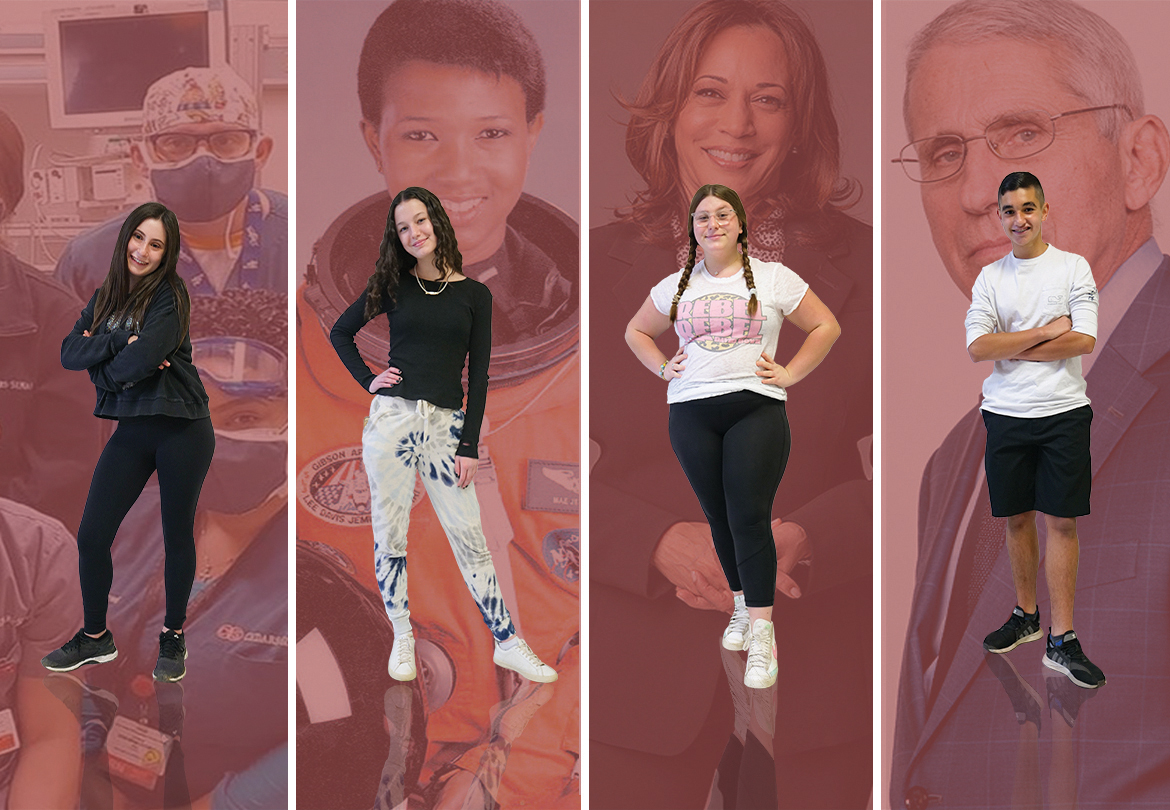 In March, grade 8 students participated in the HCC Person of the Year project, choosing and researching someone who inspired them. They practiced their persuasive writing and public speaking skills to convince an audience that their person was the most worthy of this honor.

“Students had the option of doing a live speech or a pre-recorded video,” said Mrs. Melinda Fuller, grade 8 teacher. “Some students, who initially did not want to present in person, changed their minds as they saw their peers taking risks by delivering live speeches. The build of confidence was great to see.”

As a result of the pandemic, this year provided students with more diversity in their selection of new heroes and role models. Students watched sample speeches for motivation and researched articles, videos, and other sources to gain information about their person. There were three presentation opportunities after students completed their research, note-taking, and speech writing. Students were evaluated on the depth and accuracy of their research and how compelling they were in communicating their point of view.

“I liked this project because it gave us a solid platform to show who we looked up to and why they were important,” said student Ashley Stangel. “We got to shine a spotlight on our person and share information with our peers.” Ashley chose Kamala Harris, who she admires greatly. She expressed her excitement throughout the presentations and gained confidence while cultivating her communication skills.

Delivering her speech was the most valuable skill that student Ella Saltstein attained from this project. She worked on her pace, eye contact, and general comfort in front of a group before her official presentations. “I chose Mae Jemison, the first woman of color in space,” said Ella. “I was inspired by her drive, her medical background, and of course her space travel.”

John Cavada chose Dr. Anthony Fauci after listening to his press conferences during the pandemic about the nation’s medical state. “My favorite part of this project was presenting my speech,” John said. “Not only did I gain an understanding of medicine and the impact of Dr. Fauci, but also how to be a leader and make a difference.” John hopes to become a scientist someday and plans to model the virtues of Dr. Fauci.

“It was hard to choose one person because so many people were making an impact this year, so I chose all frontline workers instead of one individual,” said student Addison Freeman. “They are making such an impact this year even though they get such little recognition.” Addie was so pleased that others agreed with her choice that frontline workers were worthy of this honor. “I loved presenting my speech and moving to the next level. I felt so proud,” said Addie.

The grade 8 team of teachers could not have been happier with the outcome of this project. “The students’ hard work, persistence, collaboration, and rigor all reflected their thirst for knowledge,” said teacher Ms. Jeanine Cappello. “The people they selected and their enthusiasm for the project was nothing short of astounding.”

Students were steadfast in their decisions about the Person of the Year and were convincing in their arguments. They also gained valuable insight into other significant people by listening to and assessing their classmates’ projects. The benefits from this experience are immeasurable and will be utilized throughout these students’ academic and professional futures.