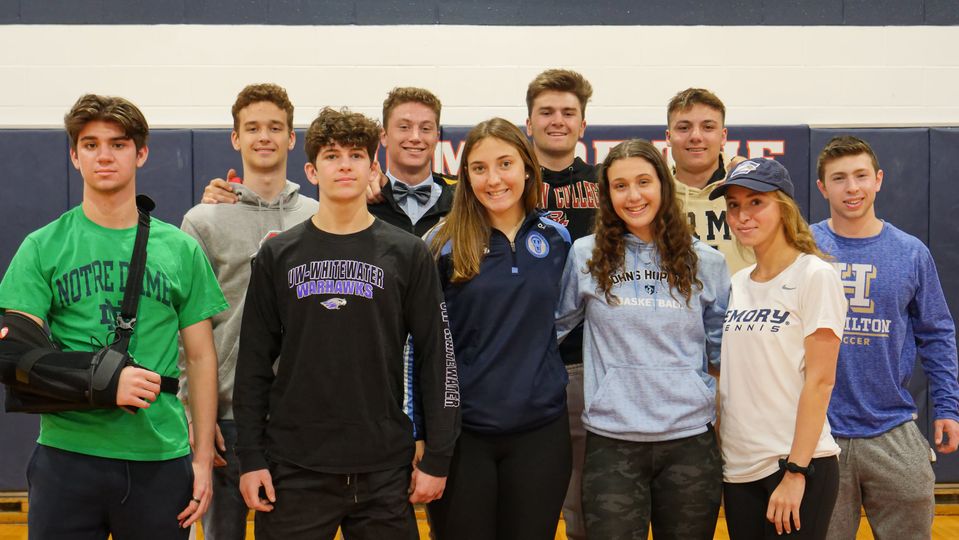 Byram Hills High School Celebrates 10 Student-Athletes Committed to Playing in College
May 2 2022 9:44 AM

Byram Hills High School honored its 10 student-athletes who are taking their skills to the next level in college.

Byram Hills High School honored its 10 student-athletes who are taking their skills to the next level in college.

“Congratulations to these talented and dedicated athletes,” said Brett Alcantara, the Byram Hills Assistant Athletic Director. “We are proud of all of their accomplishments, hard work and passion. Their commitment to their sport is commendable and we wish them all the best of luck.”

At a ceremonial signing day event in the high school gym on April 26, the students were recognized for their accomplishments on and off of the playing field. They were lauded for their leadership and academics as well as for their athleticism.

“Each and every one of you sitting at the dais, while performing on the athletic fields and gyms and courts, have had your academic average surge,” said teacher Matt Allen, the boys varsity soccer coach who introduced the athletes and highlighted their accomplishments. “Each of you has blossomed into incredible role models here at Byram Hills.”

“For a school the size of Byram Hills, a B school according to New York State, we have 10 athletes playing at the next level, a testament to your accomplishments throughout the last four years,” he added.

The students answered news conference style questions that touched on the leadership skills they’ll bring to their new teams, favorite moments playing for Byram Hills and their biggest challenges and goals in the future with their sport.

Here is a closer look at the Byram Hills athletes continuing their athletic careers in college:

Irene Byrnes, City of Dublin/Trinity College, Ireland, lacrosse: Irene will play for the city of Dublin and attend Trinity College. This season, Irene scored more than 30 goals, including a stunning behind-the-back goal against Nanuet. She is one of the top defenders in the league.

Bobby Chicoine, Boston College, baseball: Bobby is a right-handed pitcher who has been an integral part of the varsity program since eighth grade. His career pitching record to date is 14 wins, three losses, two saves, 128 innings pitched, 1.64 ERA, and 165 strikeouts. He is a two-time All-Section recipient and is one of the most feared pitchers in Section 1. Bobby broke the all-time school strikeout record this season.

Jared Cohen, United States Military Academy West Point, baseball: Jared is a power hitter who has been on the varsity team since eighth grade. His career stats to date are: .353 batting average, 41 hits, 44 runs, seven doubles, five home runs, 25 RBIs and 24 stolen bases. He was a 2021 All-League and All-Section recipient.

Beth Corelli, Johns Hopkins University, basketball: Beth was an All-League player from ninth through 12th grades, and an All-Section player in 11th and 12th. She was co-MVP of the league in her junior season. During her senior season she won the distinct award of Con Edison Player of the Week and eclipsed the highly sought after 1,000-point mark, with an eventual total of 1,093 points in her career while averaging 16.5 in her junior season and 15.7 in her senior season.

Ross Eagle, Hamilton College, soccer; In his four seasons, Ross led the team to 50 victories, and a team record of 50-10-6. He was named All-League, All-Section and All-State in his final year and was ranked as the fourth best player in Section 1. Ross, who plays left wing, is regarded as a prolific scorer and a dominant force.

Justin Fortugno, University of Wisconsin - Whitewater, wrestling: Justin is a phenomenal wrestler whose career record is 139-35. He is the all-time wins leader at Byram Hills High School. He has the highest winning percentage in the school’s history. He finished 44-3 this past season with only one loss within Section 1. He also won the Section I championship in his weight class and is a four-time All-Section wrestler.

Nowell Gibson, The Ohio State University, fencing: Nowell has been fencing since he was 7 and has competed for the U.S. team at World Cup tournaments. He was named to the
U.S. Fencing All-American High School Team, First Team in 2019, 2021, 2022 and to the U.S. Fencing All-Academic Team, First Team in 2019, 2020, 2021, 2022. He is ranked 24th in the United Stated and won third place at the Junior Olympics in February.

Alyssa Margolin, Emory University, tennis: Alyssa has been the top singles player on the varsity team for the past three seasons, and she has been named All-League and All-Section for four consecutive years. In her senior season, she won the Section I Singles Championship and finished third in singles at the New York State Public High School Championships. Alyssa and her teammates won the New York State team championships in 2021, the first state championship for any girls team in Byram Hills history.

Bennett Rakower, Bowdoin College, lacrosse: Bennett is a midfielder who can play every position. He has 25 goals and 14 assists in lacrosse this season. Bennett, who also plays soccer and basketball, is also the only athlete to play all 12 seasons of high school.