A group of students who participated in the Written Out Loud program at H.C. Crittenden Middle School as eighth graders in the spring were celebrated at a ceremony in the high school theater. The now-ninth graders were applauded as they were called up individually to receive their book from HCC English Language Arts teachers Melinda Fuller and Jeanine Cappello.

It is not often that a piece of middle school writing gets printed and bound into a book. But on Monday, Byram Hills students got to experience the thrill of holding the fruits of their creative storytelling in their very own hands.

A group of students who participated in the Written Out Loud program at H.C. Crittenden Middle School as eighth graders in the spring 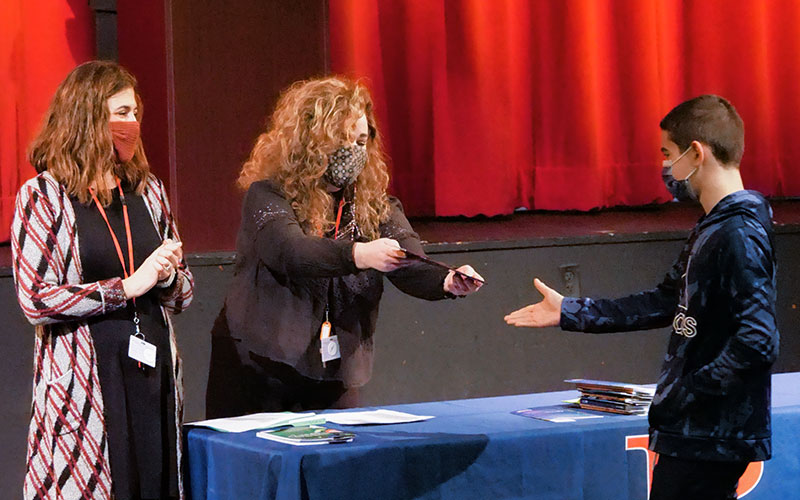 were celebrated at a ceremony in the high school theater. The now-ninth graders were applauded as they were called up individually to receive their book from HCC English Language Arts teachers Melinda Fuller and Jeanine Cappello.

“Today, you are published authors,” Josh Shelov, founder and CEO of Written Out Loud, told the students.

In the spring, 53 students worked in collaborative teams over Zoom with a mentor teacher from Written Out Loud to develop their stories by talking through their ideas. Then, each student wrote or co-wrote an original story. The program was a way to offer students something special during the pandemic and their final year at the middle school.

A key principle of Written Out Loud is that students gain courage by sharing their stories aloud.

“So many kids, they get in front of a blank page and they don’t know what to write and that just defeats them,” Mr. Shelov explained afterward. “But if they’ve developed it out loud and gotten the confidence from their peers, writing is a lot easier.” 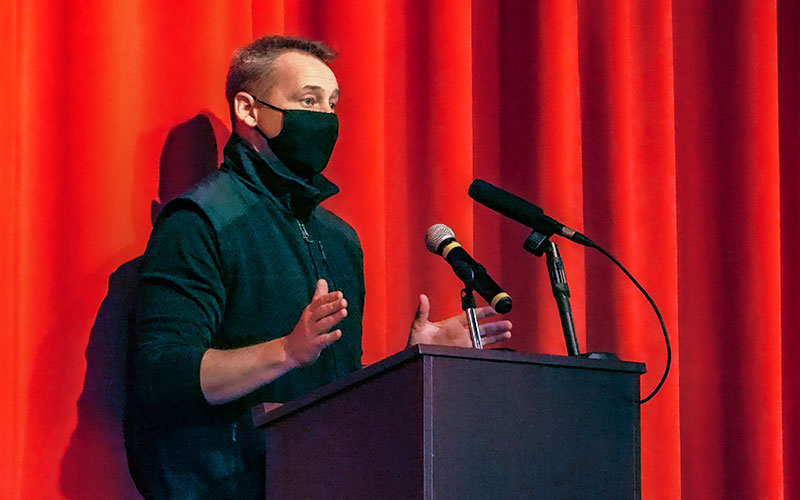 Mr. Shelov told students his own story about the creation of Written Out Loud. As a child, he was “a creative kid who felt deep down like I didn’t have a creative place to play.” He loved “Star Wars” and Quentin Tarantino movies but played baseball because that’s where his friends were.

It wasn’t until he arrived at Yale University that he found other creative types, his “kindred spirits,” and decided to pursue a career in movie-making. He wrote screenplays throughout his 20s, but said: “I began to realize that my dream was not going to come true.”

Then a friend persuaded him to write one more screenplay. He was now 32, with a wife and baby, a dog, a day job, and no free time, and he got it done the only way he could. He woke up at 5 a.m., an hour earlier than usual, put the baby in a backpack, the dog on a leash, and over a three-month period, he dictated his screenplay into a tape recorder as he walked through Prospect Park in Brooklyn.

“This process of actually saying the story out loud marked the turning point in my life,” Mr. Shelov said, and that screenplay was made into the movie “Green Street Hooligans” featuring Elijah Wood.

“Deep down, I was like, I’ve got to start telling kids when you're at the valuable, valuable age of searching for yourselves, the power of telling these stories out loud, there’s a magic in it,” he said, adding: “There is something generous, inclusive and yes, profoundly magically, about that craft of believing in your own voice to the point where you’re actually saying it out loud, live to other people.”

Mr. Shelov began creating the Written Out Loud program, and the eighth graders at H.C. Crittenden were the first class of students to participate, thanks to the generosity of the Byram Hills Education Foundation. 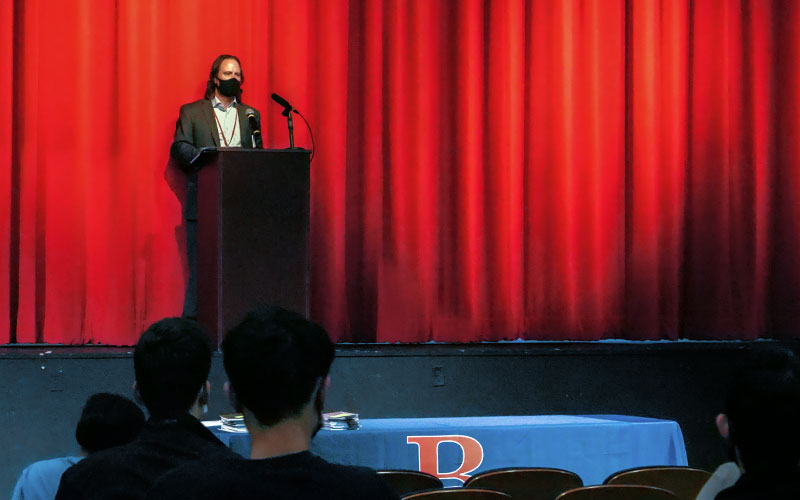 “You took a risk last year and you joined our friends at Written Out Loud on an amazing journey,” he said. “I’m amazed by what you were able to produce and I know that this experience will be a  lasting example of what can be accomplished. Under the most trying of 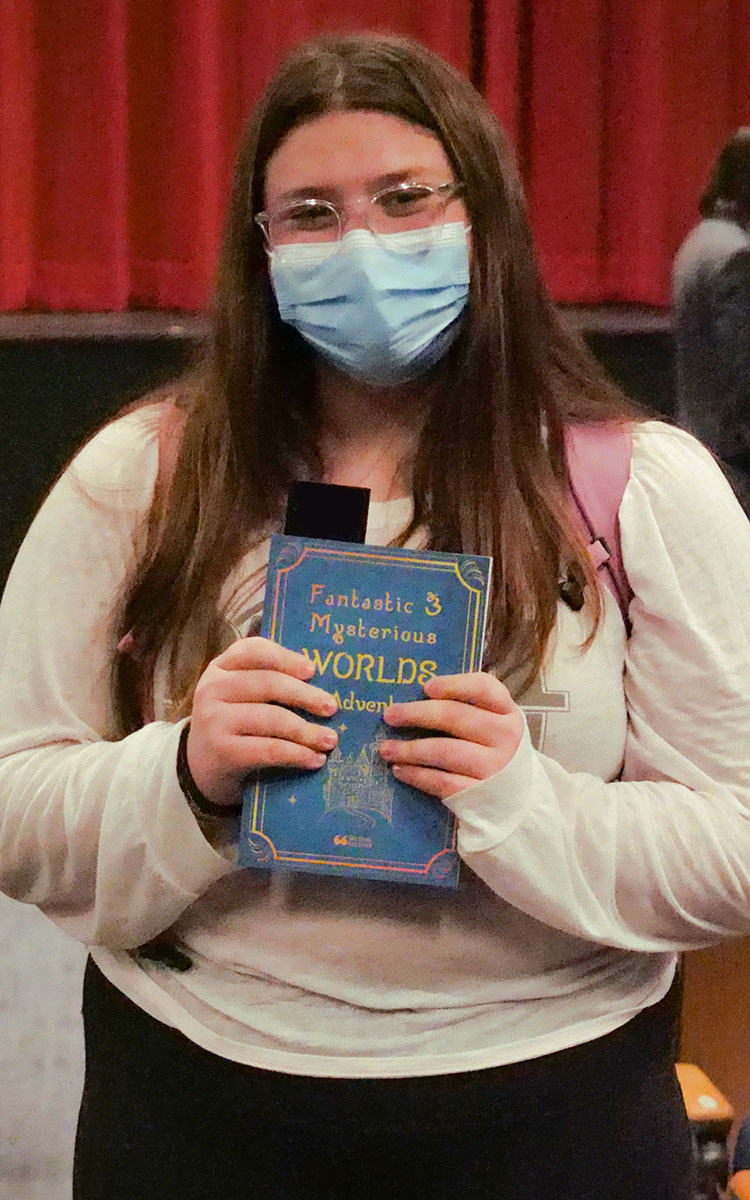 circumstances, you prevailed and we’re here to celebrate that.”

Mr. Smith announced that the Written Out Loud program, which was piloted in the spring with students who signed up to participate, will become part of the eighth grade curriculum this year.

Kim Lapple, principal of H.C. Crittenden Middle School, was grateful to the BHEF for the grant. “This generous gift from the BHEF allowed our students to be creative, be connected and become more invested in something that gives them so many life opportunities.”

Students enjoyed the feeling of holding their new books.

“It feels amazing,” John Cavada said. “Last year we were going through COVID-19, we were still dealing with the effects of the virus and the pandemic and we were on Zoom the entire time while we were making this book. To see this final product in my hands today and to be at this awards ceremony, it’s something I feel really proud of.”