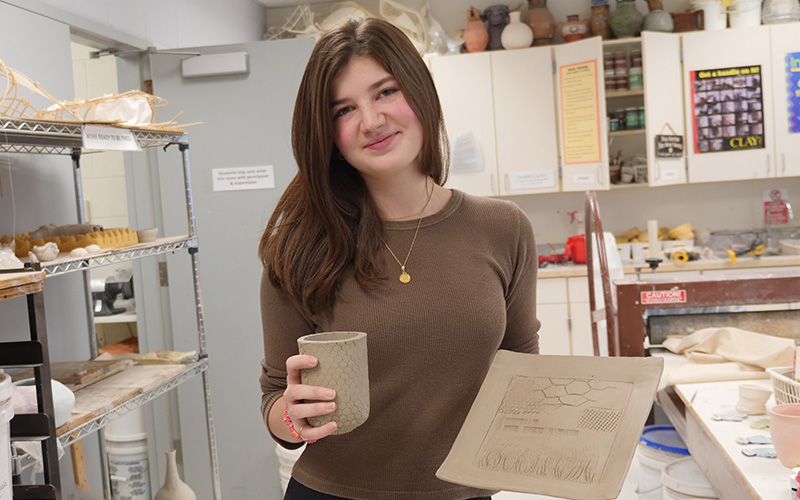 When you look at the cups and plates made in Amy Menasche’s Sculpture and Ceramics class at Byram Hills High School, you will see more than the beautiful pieces of sculpture themselves. That’s because each set contains a message about a food-related issue important to the artist.

When you look at the cups and plates made in Amy Menasche’s Sculpture and Ceramics class at Byram Hills High School, you will see more than the beautiful pieces of sculpture themselves. That’s because each set contains a message about a food-related issue important to the artist.

For the assignment, called Food for Thought, students were asked to create a cup-and-plate set that communicated an idea about food. Students learned about artists who used plates as a vehicle for expression and researched their own topics before creating their pieces.

“The idea is for students to learn that art can communicate about an interesting, important issue that affects other areas of their life and the world around them,” Mrs. Menasche said. “Many students made connections to something they’re learning in Global Scholars or health class, and I like to encourage those connections.”

Among the topics students focused on were hunger and food insecurity, clean water, protecting the bees, nutrition and an invasive pest that threatens crops. “I like seeing the variety of ideas they’re tackling,” Mrs. Menasche said.

Students had to incorporate texture into their sculptures and used various techniques including stamping, rolling or using objects like seashells, rice and kidney beans. “Even using food as the texture was part of what some students did,” Mrs. Menasche said. “They needed to use texture to create a rich, visual surface.”

The students liked learning about an issue to create their pieces. 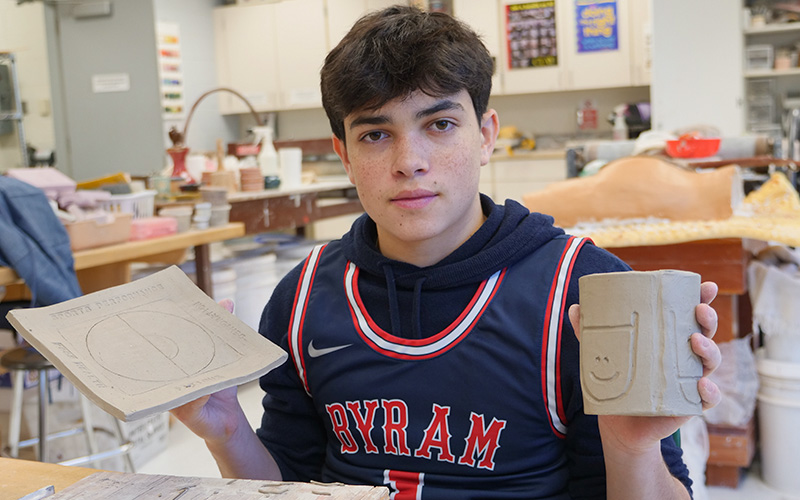 Sophomore Brody Ceisler’s set is about sports performance and nutrition. Into his plate, he stamped the words “fatigue,” “dehydration,” “poor health,” and “sports performance,” representing conditions that could affect athletic performance.

Brody said he liked that the assignment required thinking about a topic. “Art is supposed to be free but you have to actually put in work to do this project,” he said. “You get to use your brain more for this project, which I like.”

Junior Lila Raff made a set about protecting the pollinators and featured the bees’ honeycomb design. “They’re important to our food source,” she said. “When pesticides kill them, it ruins the food we eat and affects human health.”

“It’s fun to think about an issue and put it into the clay rather than do a random design,” she added. 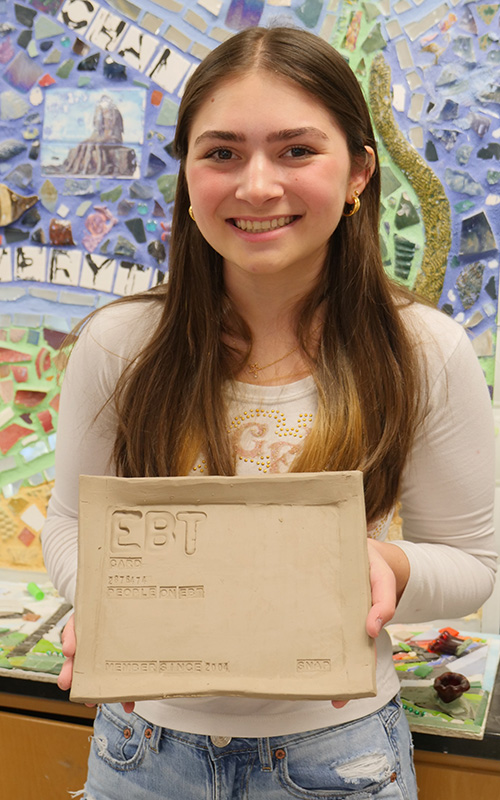 Bella Miano, another junior, fashioned her plate into an electronic benefits transfer card that included the number of people in New York State who receive public food assistance, calling attention to the problem of food insecurity.

“It affects a lot of people,” she said. “I thought it was nice to focus on this and raise awareness.”

“I wanted to make sure that people know to help support those endeavors,” he said. “This is a fantastic way to raise awareness about some issues and express our opinions on what we think is very important. It’s also a really great creative outlet for creation and expression of one’s opinion. It’s also really fun as well.”

Mrs. Menasche said the cup-and-plate sets will be displayed together at the Winter Art Show  on January 11-12. “People can walk around the table,” she said, “and it will be like you’re being invited to sit down and think about the ideas our students care about."