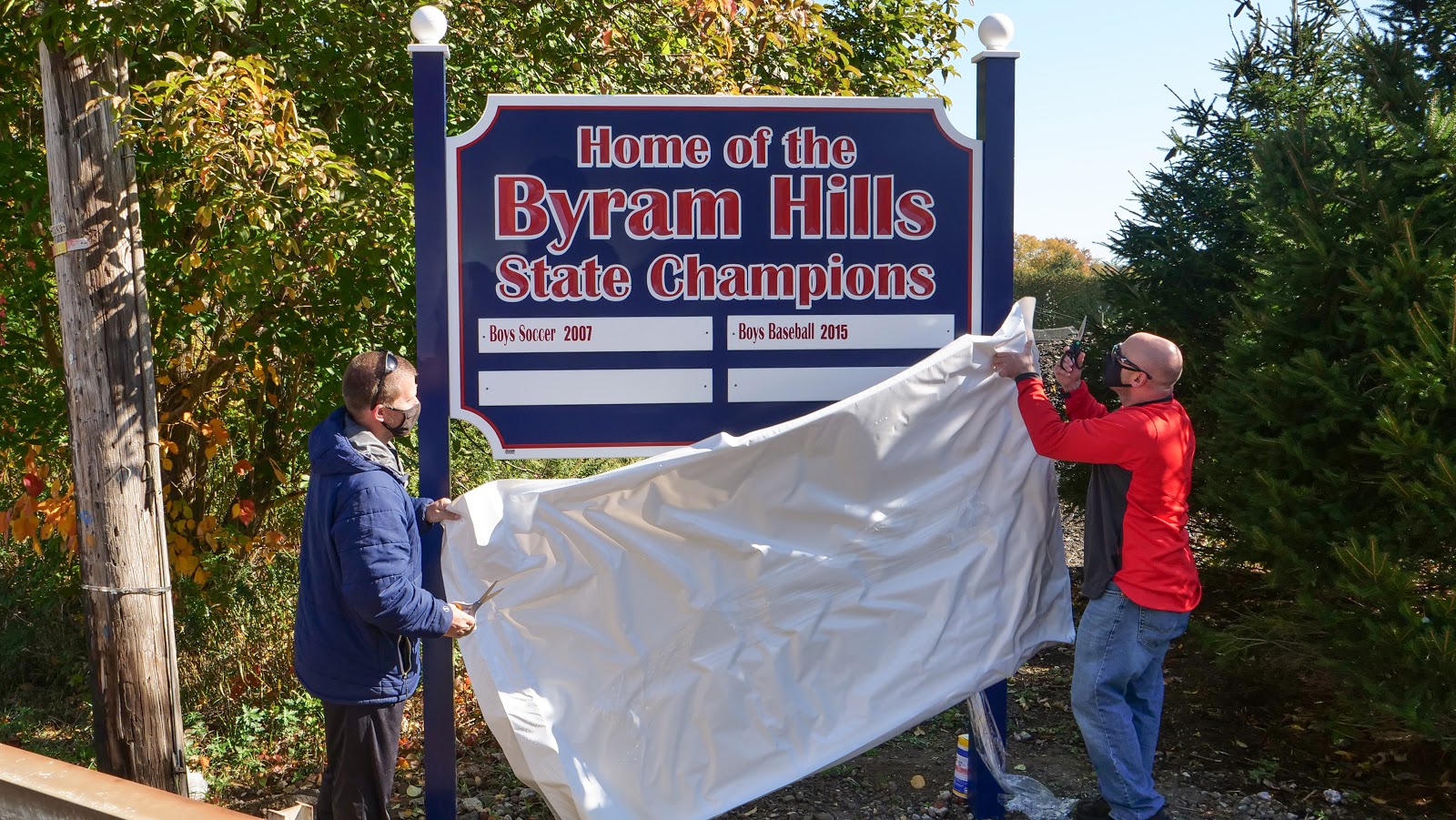 On Saturday, October 17th, the Byram Hills 2007 soccer and 2015 baseball state championship teams were honored at a sign unveiling near downtown Armonk.  Alumni, community members, the Board of Education, and members of the North Castle Town Board attended.

“Our children going to school right now need role models to know what success and achievement look like," said Dr. Jen Lamia, Byram Hills Superintendent. “Every day that they drive into this town, they can see what you have done and aspire to achieve. When you come home, you can see that your town and your school district stand behind you and take intense pride in you."

Michael Schiliro, North Castle Town Supervisor, was pleased to see the students get the recognition they deserve. “This sign will be here forever to show your families that you were state champs,” said Mr. Schiliro. “We can’t wait to add more teams to the sign.”

Ira Schulman, Byram Hills Board of Education President, addressed the crowd and said, “The most important message I’d like to convey is that we are not training athletes to be students but student-athletes.  At Byram Hills, academics will always come first.”

Rob Castagna, Byram Hills Athletic Director, thanked the parents for their trust and support and congratulated the athletes and coaches. “It is such an honor to work with Coach Allen and Coach Saunders,” Mr. Castagna said. “What they bring to the athletic program is off the charts and hard to measure.”

Before unveiling the sign, both coaches spoke. “The 2007 soccer team played 24 games and gave up nine goals,” said Byram Hills Soccer Coach Matt Allen.  “A great team’s mark is that since the state championship, no Byram Hills soccer team has lost more than three games.”  Mr. Allen paid special thanks to Michael Gulino, retired Byram Hills Athletic Director, and mentioned his joy in sharing the honor with friend, Coach Saunders.

“Matt, you paved the way for future teams to win the state championships and showed Byram Hills that it was not a fantasy; it was a reality,” Scott Saunders, Byram Hills Baseball Coach said. “For my 2015 team, seeing the men you have become has been one of the coolest experiences of my career.”

The two coaches tore down the paper to cheers from the crowd, revealing the sign, a joint donation from the Byram Hills School District, and the Town of North Castle.  The ceremony exhibited Bobcat pride at its finest.