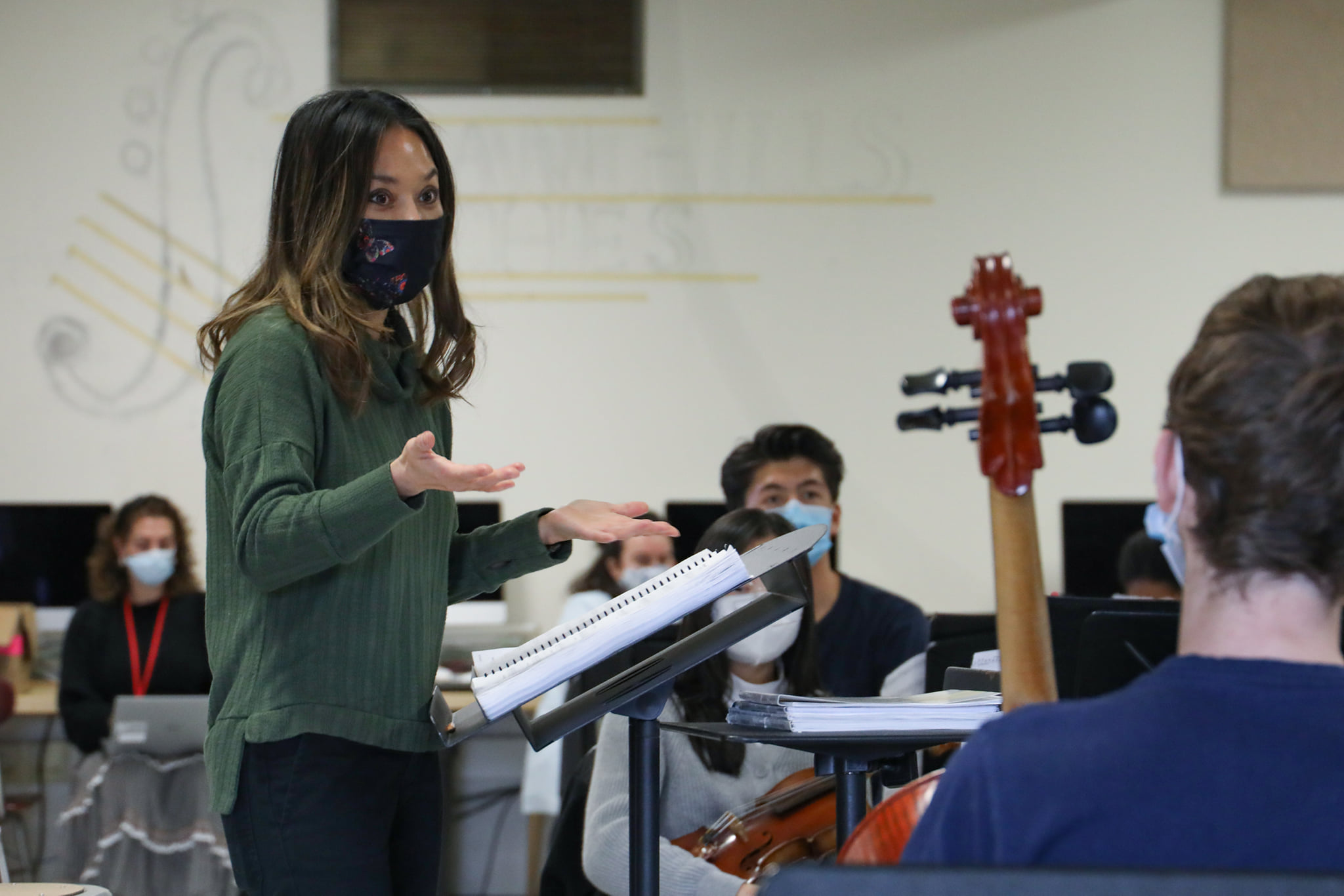 Soon Hee Newbold, a California-based symphonic composer-conductor and musician who has played all over the world, spent Dec. 2 working with Byram Hills string musicians thanks to a Byram Hills PTSA Cultural Enrichment Grant.

As they rehearsed a selection for their upcoming winter concert, student musicians at Byram Hills High School and H.C. Crittenden Middle School were led by an inspiring guest conductor with unmatched credentials: the very composer who wrote the music.

Soon Hee Newbold, a California-based symphonic composer-conductor and musician who 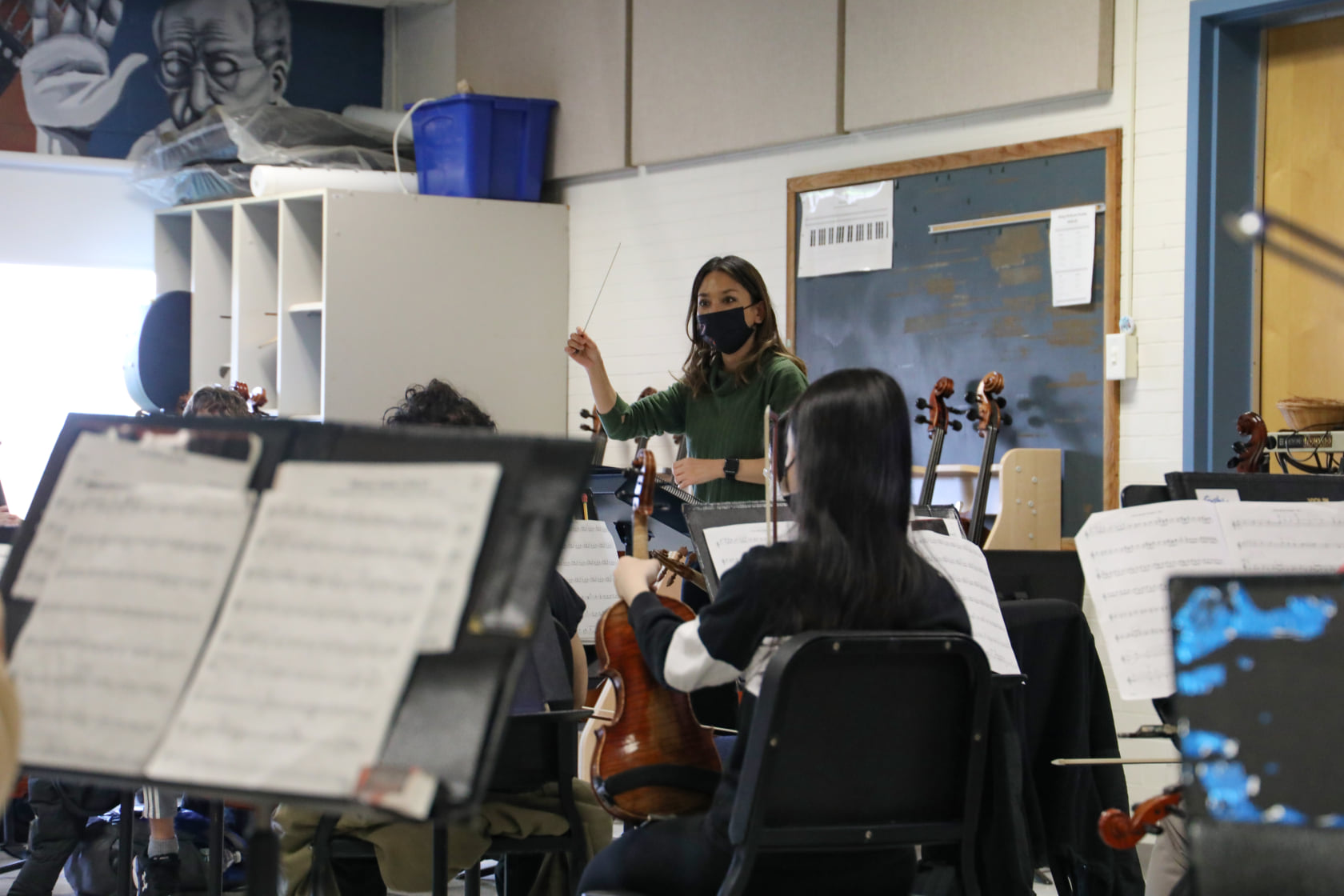 has played all over the world, spent Dec. 2 working with Byram Hills string musicians thanks to a Byram Hills PTSA Cultural Enrichment Grant.

Ms. Newbold rehearsed with the String Orchestra at the high school in the morning and spent the afternoon at the middle school, where she worked with the Grade 7 Orchestra and the Grade 8 Chamber Players. About 80 students in all participated.

“I enjoyed every second of it,” Ms. Newbold said at the end of the day. “It’s always rejuvenating and always really inspiring for us as writers to come and see the feedback that you get from the students and to see new talent coming up.”

Each session began with students playing her work, “Orion and the Scorpion” at the high school and “Viking” at the middle school. She worked with students, going line by line through the music and giving feedback on the different parts.

In the morning, Ms. Newbold explained her inspiration for the energetic and epic “Orion and the Scorpion,” which was partly from Greek mythology, but also from her love of space exploration and the birth of stars. “Very nice, very spacelike,” she said at one point as they rehearsed. “I feel like I’m in a cluster of stars now.”

The high school players did a great job, she said. 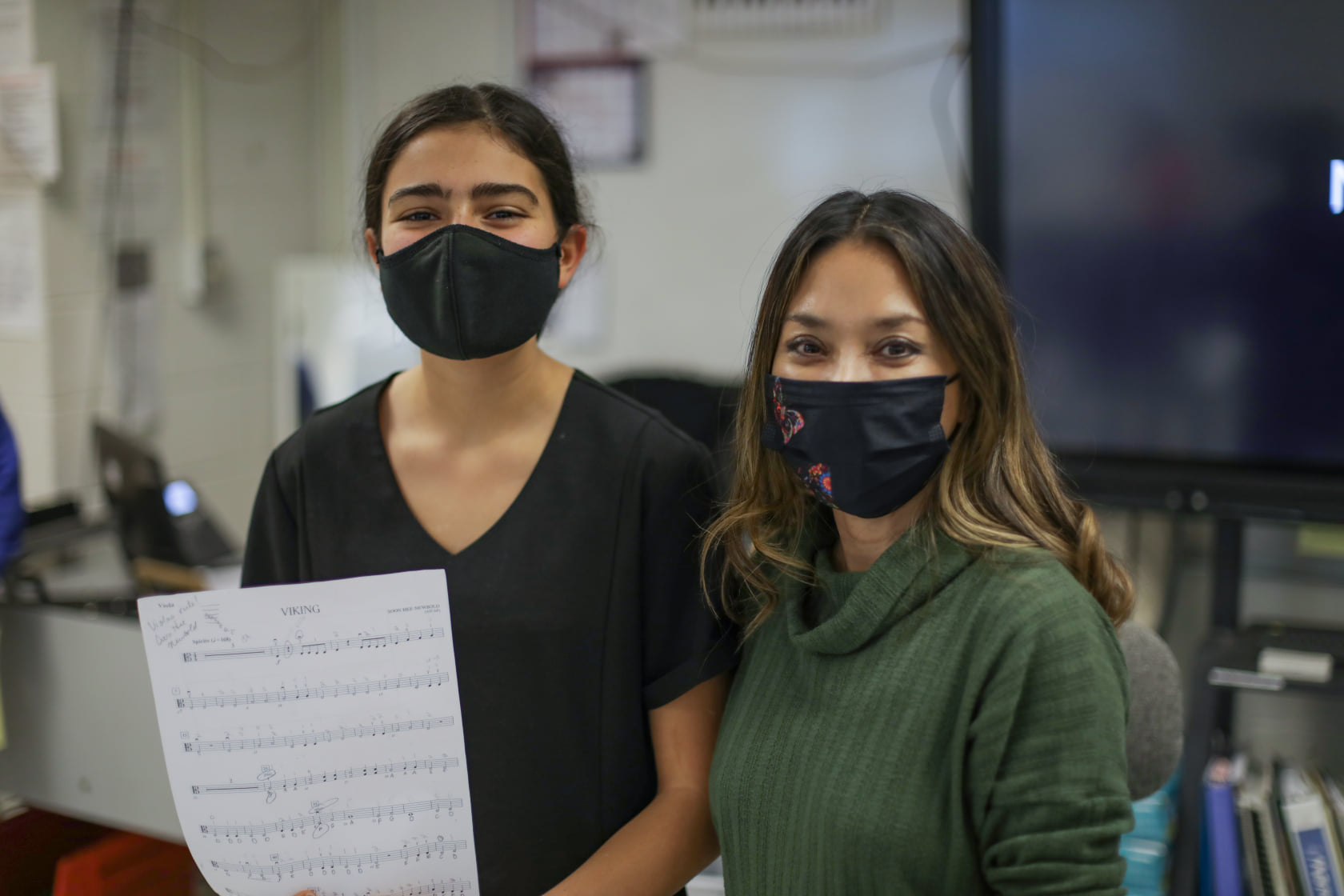 At H.C. Crittenden Middle School, Ms. Newbold talked to students about the history of Vikings, and explained that she drew inspiration for the piece from her Swedish grandfather, who was descended from Erik the Red.

“When you think of Vikings, what do you think of?” she asked, and heard answers including “brave,” warriors” and “aggressive.” “Those are really good words. Utilize that when you’re playing.”

Of the seventh and eighth graders, Ms. Newbold said: “What was really great about them was their energy and they just really enjoyed playing the music and they learned so fast. It’s really impressive.”

In addition to her music career, Ms. Newbold is also a filmmaker and a reserve officer with the Burbank, California, Police Department. The multitalented Ms. Newbold, who began playing piano at age 5 and also plays the violin and viola professionally, autographed the “Viking” sheet music for middle school musicians.

Students enjoyed meeting her and learning about her life and work.

“It was pretty cool because her vision of this piece was really different from what we imagined it would be,” said Byram Hills High School sophomore Grace Lin, who plays the violin. “Now it’s less of a battle and more about exploring the stars, so I think I approach it differently now.”

Margaret Pollack, also a sophomore who plays the violin, said: “It was nice to hear from the person directly because you can see what their intentions were. It was informative to see what she was trying to do.”

Seventh grader Stephen Lombardi, who plays the string bass, said it was “surreal” to meet the composer of “Viking,” and said practicing with Ms. Newbold will help his playing. “This is probably a once-in-a-lifetime chance,” he said. “I’ve enjoyed it.”

Collaborating with Ms. Newbold to learn and incorporate new ideas about her interpretation of the music will help students with their upcoming performances, said Aaron Lockwood, the high school’s Orchestra Director. “This authentic experience of working with a live composer was invaluable for our students,” he said.

“Soon Hee Newbold's visit provided students with a unique opportunity to work alongside a professional composer and artist,” he said. “After learning about Ms. Newbold's background and studying her music, it is easy to see why she has become a favorite among young musicians.”

While the students were inspired by Ms. Newbold, she too gained inspiration from the students: “I definitely get inspired when I see them excited about music.” 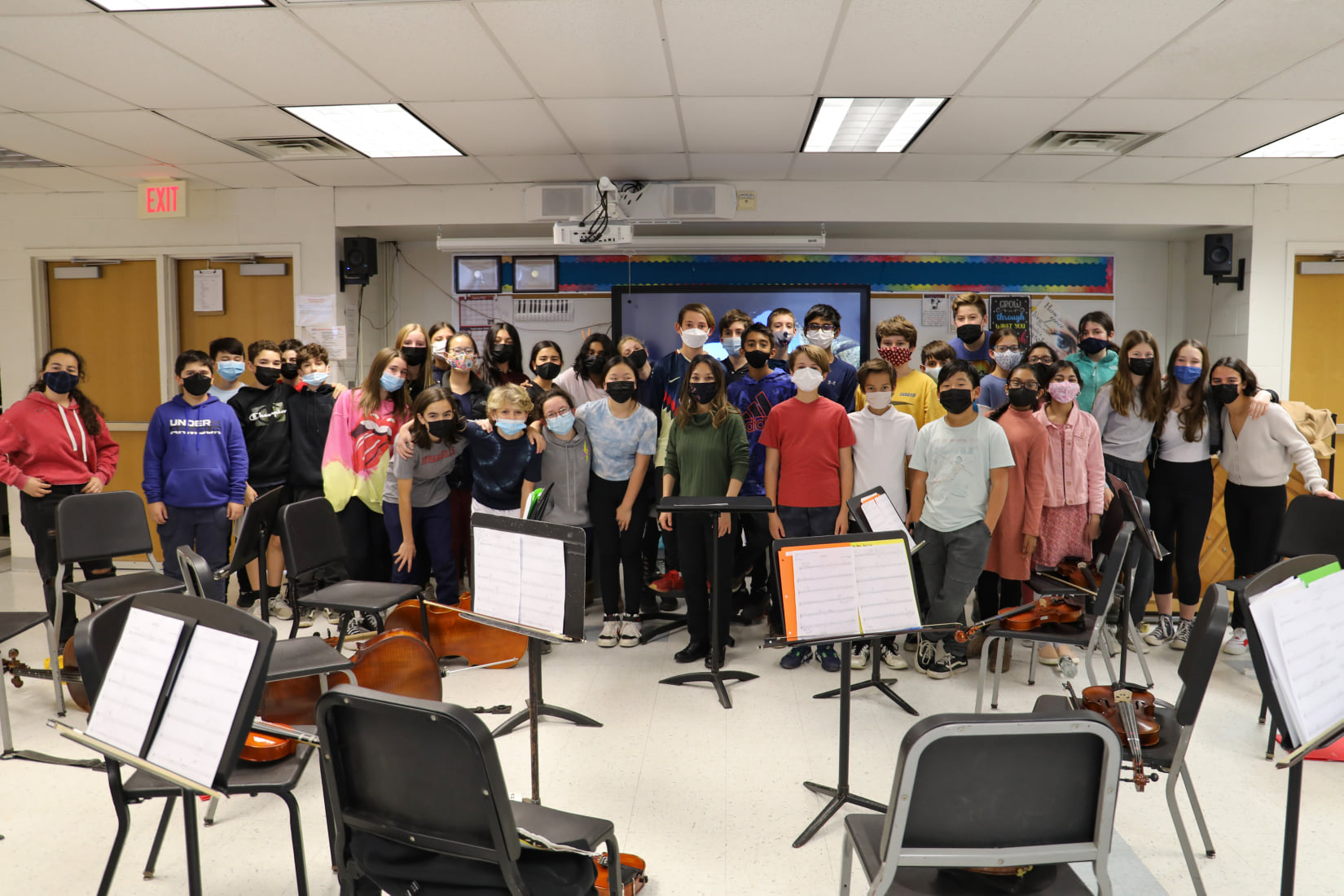 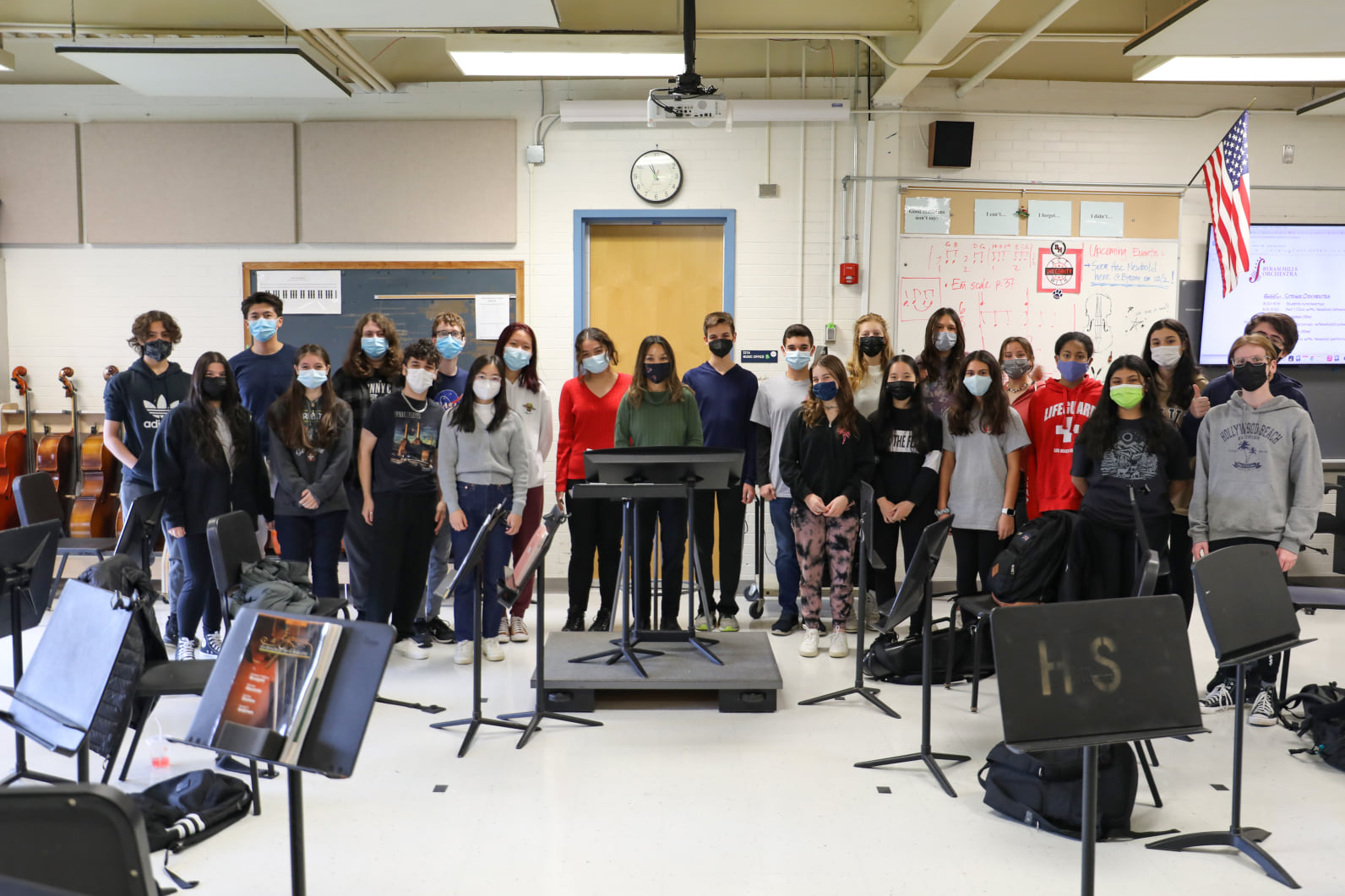