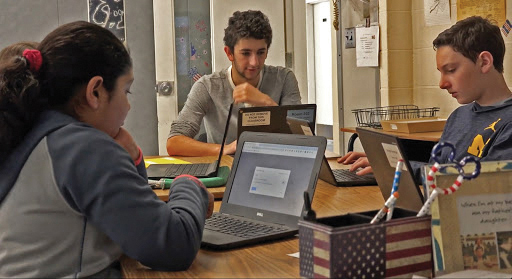 The Model Congress Unit included the entire seventh grade at H.C.Crittenden and incorporated one of the District’s goals of integrating project-based learning into the curriculum. “We saw a great opportunity for students to take more ownership of their learning as they developed their own laws,” said Mr. Andrew Benowich, H.C. Crittenden Special Education teacher.

The unique hands-on learning experience involved every seventh-grader, as well as high school seniors enrolled in the AP Government class.  At the beginning of the unit, students were tasked with creating bills and going through the process of ushering the bills into law.

The students took on current issues in American culture and politics, such as equal rights, animal testing, veteran rights, and the environment. They researched the problems and offered solutions in the form of proposed legislation.

While the seventh graders’ study government, law, and politics, this was the first year in which students from Mr. Andriello’s high school AP Government class

were in their roles as mentors.

“It was nice to go back to the middle school and guide the students in a way that would make a difference,” said Sophia Giamartino, a Byram Hills senior.

Owen Jacobs, a seventh-grader, said, “I loved working with the high school students because they influenced me to think more in-depth and put more detail into my bill.”

Students evaluated the bills as lobbyists and advocated for or against a variety of issues ranging from the environment and climate change to gun control.  The high school students researched, prepared, and presented testimony.
Mr. Andriello added, “It was interesting to empower the seniors to be leaders. The seniors worked well with the seventh graders answering questions, guiding internet searches, keeping them on task, and completely engaged for the limited time they shared.”

According to Mrs. Iskovitz, seventh-graders learned how to work together, compromise, hear other opinions, and respond to people who might be against their idea.  “These are real-world skills.”

In the end, eight bills made it to the House of Representatives for a vote. In a formal session of Congress, there was a live vote, and students heard the results in real-time.

Student, Owen Jacobs, introduced a law that would institute armed security guards at main school entrances. Owen said, “Out of 52 bills, mine was one out of four that passed into law, it felt great!”

The students’ excitement when they saw which bills passed, regardless if they wrote it, showed how much they were invested in the project.