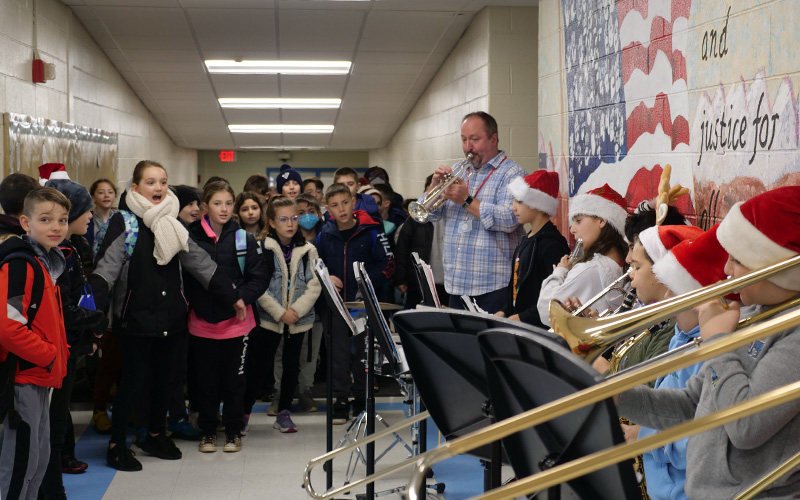 Fifth graders at Wampus Elementary School greeted students with musical cheer as they arrived at school this week, playing a selection of classic wintertime songs.

Fifth graders at Wampus Elementary School greeted students with musical cheer as they arrived at school this week, playing a selection of classic wintertime songs.

Performing in the front entryway on the mornings of December 19, 20, and 21, band members played “Jingle Bells,” “Up on the Housetop,” “The Dreidel Song,” and “Winter Wonderland.” A different group of students played each day.

“Our fifth grade band members were terrific,” said band teacher David Wolfe. “They played together and they played really well at a

“When you play music at this time of the year, it brings everyone in the building together,” he added. “It was a nice togetherness activity.”

On Monday, December 19, many Wampus students stopped to enjoy the festive music and applauded at the end.

The band members who performed that day said they enjoyed playing for an audience.

“It was very fun to be able to perform for others and those songs are some of my favorites, the holiday collection,” said Nina Cavada, who played the flute. “It was a really good experience to be able to play in front of my classmates.”

“I’m kind of exhilarated because it was cool how everyone crowded together to hear us play,” she said. “It was like a real concert.”

Jayden LaPorta, who played percussion, was happy to be playing with other musicians.

“It was fun because we all got to play holiday songs together and we got to just be all together and play for other people,” he said.

Max Schoenhaut, who plays the alto saxophone, said he felt excited and proud. “There were a lot of people watching and I think they liked it,” he said.

The performances not only offered wintertime cheer but also benefited the band members.

“I have found that students who have done this in past years tend to progress further or faster because they have been up in front of an audience in a small group,” Mr. Wolfe said. “It increases their confidence and motivation to do well in music.”

The performers, who signed up to participate, attended several before-school rehearsals to prepare. 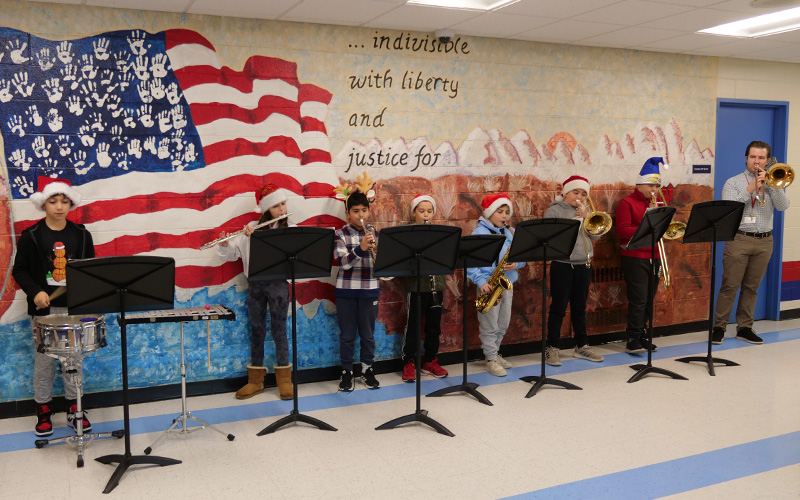