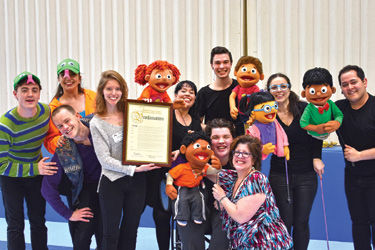 As a grade-school student in the Byram Hills School District, Bonnie Gleicher delighted the crowds as she starred in “Peter Pan” and “The Wizard of Oz.” In the springtime, this distinguished 2006 graduate of Byram Hills High School returned with another special musical treat.

Ms. Gleicher, the composer and lyricist of the off-Broadway production “Addy & Uno,” brought the show to Wampus Elementary School in May. With five main characters who have adisability, the show bills itself as the first family musical about disability. Friendship and kindness also play starring roles.

The musical tells the story of Uno, a boy who has autism and loves math, and his four friends, who each have a different disability. Together, they support Uno all the way to the math competition, facing bullies along the way.

Ms. Gleicher, a 29-year-old singer-songwriter, said she instantly fell in love with the story and the characters after being recommended for “Addy & Uno.”

“These are characters that face so many obstacles every day and yet they face them with so much humor and fun and true friendship,” she said. “I was so inspired by them, so much that I wrote the first song the next day.”

She was thrilled to have the show on stage at Wampus, where it was enjoyed by third and fourth graders.

“They’ll learn about being kind to people and not bullying people and understanding what people are going through without even realizing it,” Ms. Gleicher said. “I’m so excited to help that next generation to get there.”

She is hopeful that it will inspire Wampus students.

“I hope they feel like when they see someone, that they’re more understanding of what they’re going through when someone is different from them, that they feel empowered to be friends with them, instead of fearful of them,” she said.

Judy Brewster, who directed Ms. Gleicher in school musicals and just retired as the Wampus assistant principal, remembers her as a talented performer. Ms. Gleicher was Peter in “Peter Pan” in third grade; she played Dorothy in her fourth-grade production of “The Wizard of Oz.”

“As a third grader, she was amazing,” Ms. Brewster said. “She had this huge voice. When she auditioned, the whole room became silent because her voice was a Broadway voice. I knew as soon as she opened her mouth in third grade that she’d be famous someday. That’s how talented she was, and still is.”

To help prepare Wampus students for the show, special education teacher Lindsey McHale designed a presentation for third and fourth graders about students with disabilities.

Mrs. McHale told administrators: “The anticipation of the show provided the perfect opportunity to talk with our students about differences and to answer their many questions.

After the performance, Evan Latainer, the director of Westchester County’s Office for People with Disabilities, and Anna Masupost, CEO of the agency, presented Ms. Gleicher with a proclamation that recognized her commitment to musical theater and honored her as an outstanding citizen.

With thanks to the Byram Hills Parent Teacher Student Association, which funded this production.